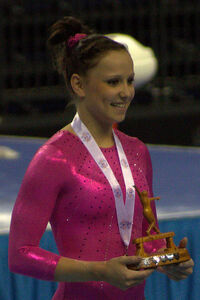 Hannah Kate Whelan was born on July 1, 1992 in Singapore. Whelan was a member of the 2008 Great Britain Olympic team and will also be a member of the 2012 team where she will compete in Women's Artistic Gymnastics. She was British All-Around Champion in both 2010 and 2011. She trains at City of Liverpool Gymnastics club along side Beth Tweddle, Jennifer Pinches and Rebecca Tunney who are also on the British 2012 Women's gymnastics team.

Retrieved from "https://gymnastics.fandom.com/wiki/Hannah_Whelan?oldid=3602"
Community content is available under CC-BY-SA unless otherwise noted.