The vault is an artistic gymnastics apparatus, as well as the skill performed using that apparatus. Vaulting is also the action of performing a vault. Both male and female gymnasts perform the vault. The English abbreviation for the event in gymnastics scoring is VT. 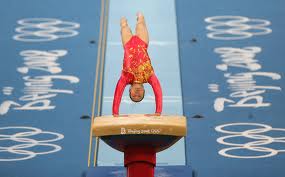 The apparatus itself originated as a "horse", much like the pommel horse but without the handles; it was sometimes known as the vaulting horse. The horse was set up with its long dimension perpendicular to the run for women, and parallel for men.[1] The vaulting horse was the apparatus used in the Olympics for over a century, beginning with the Men's vault in the first modern Olympics and ending with the Men's and Women's gymnastics at the 2000 Olympics.

The horse has been blamed for several serious accidents over the years. In 1988, American Julissa Gomez was paralyzed in a vaulting accident; she died from complications from her injuries three years later.[2] During warmups at the 1998 Goodwill Games, Chinese gymnast Sang Lan fell and suffered paralysis from a cervical-spine injury.[3] In series of crashes when the horse's height was set too low[4] at the 2000 Olympics, gymnasts either rammed into the horse's front end, or had bad landings after having problems with their hand placements during push-off.

Following the 2000 problems, the International Gymnastics Federation (FIG) re-evaluated and changed the apparatus, citing both safety reasons and the desire to facilitate more impressive acrobatics.[1] The 2001 World Artistic Gymnastics Championships were the first international competition to make use of the "vaulting table", an apparatus made by Dutch gymnastics equipment company Janssen-Fritsen since the mid-1990s. It features a flat, larger, and more cushioned surface almost parallel to the floor, which slopes downward at the end closest to the springboard; gymnasts nicknamed it the "tongue";[1] it appears to be somewhat safer than the old apparatus.[5]

In 2007, Dutch junior gymnast Imke Glas was seriously injured after a fall on a vault.[6]

To perform a vault, the gymnast runs down a runway (the run), which is usually padded or carpeted. They hurdle onto a springboard and spring onto the vault with their hands (the preflight or first flight, and block). For vaults in the Yurchenko family, the gymnast will put their hands onto a mat that is placed before the springboard, round-off onto the board and do a back handspring onto the vault. The off-flight or second flight may be as simple as leaping over the apparatus or as complicated as executing one or two saltos and/or several twists. The gymnast then lands on the mat on the other side of the apparatus.

Gymnasts are expected to land cleanly, with no hops or steps, and within a set landing zone on the landing mat.[9][10] They must also demonstrate good technique and execution in the actual vault. Falling or stepping on landing incurs deduction, as will lack of height off the table or distance from the table.[10][11]

Gymnasts (both male and female) perform one vault in Qualification, Team Final, and All-Around Final.[10][12] In the Event Finals, gymnasts must show two vaults.[10][12] For men, the two vaults must be from different element groups,[12] while women must show two vaults with different repulsion from the vault table (one forwards and one backwards).[10]

Yurchenko style vaults must have a safety collar in place around the springboard. Gymnasts who do not use this collar will be judged as an invalid vault.[10][11]

Every vault is assigned a specific number; this number is displayed on a board or electronic screen before the gymnast begins. There is no deduction for flashing one vault number and performing a different one.[10][12]; however, gymnasts will be penalised if they fail to show the number.[10][12]

If a female gymnast balks -- for example stops in the middle of the runway or breaks their run before touching the springboard -- no deductions are taken. The gymnast is given thirty seconds to return to the end of the runway and make a second attempt at the vault. If, however, the gymnast touches any portion of the springboard or vault itself, they receive a score of zero and may not make another attempt.[10] For example, Ekaterina Kramarenko touched the vault and was given a zero during the team final at the 2007 World Championship. Male gymnasts receive a score of 0 if they do not vault once they start running.[11] Both male and female gymnasts receive a score of 0 if they fail to land on their feet first.[10][11]

Receiving spotting assistance from a coach will also result in a score of 0.[10][11] Vaulting before the judge has signaled the gymnast can vault once resulted in a score of 0, which occurred at the 2008 Olympics to Anna Pavlova during the Vault event final on her second vault. This deduction has since been removed.

Vault styles are broken into various groups. The group a vault style fits into is determined by the action performed during the vaulting movement.

There are five vault categories for men:

There are five vault categories for women:

Retrieved from "https://gymnastics.fandom.com/wiki/Vault?oldid=3580"
Community content is available under CC-BY-SA unless otherwise noted.